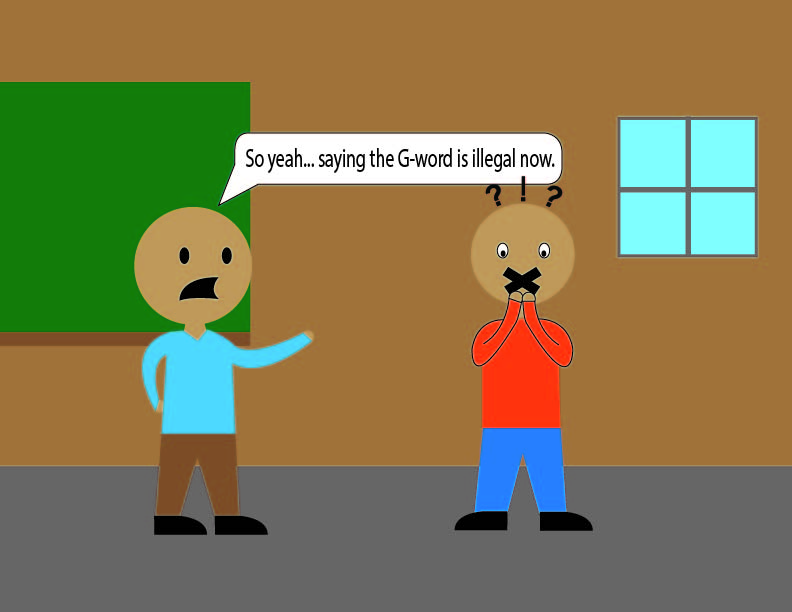 When same-sex marriage was legalized, many assumed that that was the end of all sorts of homophobia. Unfortunately, winning the fight for equality is not that easy. In Florida, a new law — officially named the “Parental Rights to Education” bill, but dubbed the “Don’t Say Gay” bill by allies nationwide — was introduced, and prohibits all discussion surrounding queerness. In kindergarten through third grade, sexual orientation and gender identity is to be entirely dismissed and ignored. In grades above that, the content will be heavily censored and limited. Being able to get married does not mean that the LGBTQ community no longer faces homophobia — one might even say that the discrimination we face today is even scarier.

According to ABC News, the “Don’t Say Gay” bill aims to avoid discussions that are not deemed “age-appropriate or developmentally appropriate for students in accordance with state standards.” These “inappropriate discussions” include any topics relating to gender and sexual identity. Sophomore Eli Galit expresses intense distaste for the bill, saying that it is “ridiculous” and that “students must be taught [about sexuality and gender identities] in order to educate the youth.” In an article by USA Today, quoting Democratic, and openly gay, state representative Carlos Guillermo Smith, an amendment to the bill requires a “state-mandated outing of LGBTQ students to parents… this will have devastating effects for our youth.” Senior Haley Bautel explains how “forcing a student into coming out is just not okay. This very possibly may even lead to endangering a student’s safety if they are forced to come out to homophobic parents, creating an unsafe home environment, and an extremely terrifying situation for a child to have to endure.” Bautel later says that this bill will have a  “detrimental effect on LGBTQ mental health, especially for those in states impacted by the ‘Don’t Say Gay’ bill, as it will reinforce the discrimination of LGBTQ students and allow for the toxic cultures of hatred and bullying of LGBTQ children to prevail.” Bautel is correct in all aspects — with queer youth already having a horrifically high suicide rate, this bill will do nothing but put more LGBTQ children in harm’s way.

Later in the USA Today article, Representative Smith is quoted again with research that says,  “LGBTQ youth are four times ‘more likely to seriously consider, make a plan for, or attempt suicide than their peers and that at least one LGBTQ youth aged 13–24 attempts suicide every 45 seconds in the U.S.’” This staggering number will only have more chances to rise with the introduction of the “Don’t Say Gay” bill. There is no other way to word the reason for the “Don’t Say Gay” bill than blatant, unfiltered homophobia; an attempt at making society entirely cisgender-heterosexual, an attempt to rid society of education about LGBTQ identities, history, and issues — as if school curriculums ever covered those topics. Junior Max Fleischman comments that this bill is yet another “unnecessary stressor” for LGBTQ youth, and freshman Sam Betts says that this bill, especially for students in Florida, would “tear [student’s mental health] down.” Although the governor of Florida, Ron Desantis, has not officially signed this bill into law, when he inevitably does, the bill will go into school curriculums starting on the first of July. Governor Desantis has a long history of homophobia, and Fleischman emphasizes that “he has made a lot of really horrible decisions that are gross and insensitive.” Galit says that while they do not know much specifically about Desantis’ past, “his history and this law isn’t surprising” when you compare what he has done previously and what he is doing now.

What does this mean for the queer community? Betts figures that this bill will make being queer seem “wrong and untouchable” due to the fact that the community will now be ignored entirely in schools. According to an article by NBC News, “parents can sue school districts for alleged violations” of sexuality and gender identity being discussed in the classroom. The fact that being LGBTQ has become a legal matter is heartbreaking, scary, and unfortunately, not that surprising. With constant attacks towards the queer community everywhere, ranging from terrible hate crimes to microaggressions and snide comments in school hallways, LGBTQ folks are always walking on eggshells, and this bill only amplifies the ability for people to pretend that being part of the community is abnormal. In an article by AP News, it is reported that “dozens of students and advocates flooded committee rooms during the proposal’s early stages and then packed into the halls of the legislature as it moved toward final passage, often with chants of ‘we say gay!’” Walkouts have also been popping up all over the country in an act to fight against the “Don’t Say Gay” bill. With all the attention the bill is getting and how blatantly discriminatory it is, one is right to assume that the president would work hard to make sure the bill does not become enacted for the safety of queer Americans — but aside from a tweet announcing his allyship to the community and denouncing the bill, President Biden has not done much to show true support for LGBTQ Americans. Fleischman figures that the POTUS is “too neutral” and Galit says that they expect Biden to generally “ignore the bill since that is what people do with LGBTQ related issues.” No matter how many times Biden announces on Twitter that he has the community’s back, he has not convinced queer allies and queer youths: the two audiences that he has to reassure the most.

The “Don’t Say Gay” bill is not the only one attacking the queer community these days. BBC News counts that there are currently “four US states – Louisiana, Mississippi, Oklahoma and Texas – [that] have laws… that expressly prohibit or limit sex education to heterosexual activity.” The numbers are constantly rising when it comes to governmental attacks towards the LGBTQ community, and it is terrifying. In Texas, there is a bill that prohibits gender-affirming care for transgender youth, and Fleischman exclaims how the bill makes him “sick” and that “to deny your child [the] care [they need] to be themselves is child abuse.” It is heartbreaking and incredibly disappointing when you stop to think about how queer people always have been and always will be under fire for as long as the government can control.

For as long as history has recorded any sort of homosexuality, the LGBTQ community has been alienated and treated as outsiders. The “Don’t Say Gay” bill emphasizes and encourages these problematic ideals, and as long as this bill has a chance to be officially signed into law, the offenses towards queer Americans and queer people everywhere will never end.