The Latest Advancements in Cancer 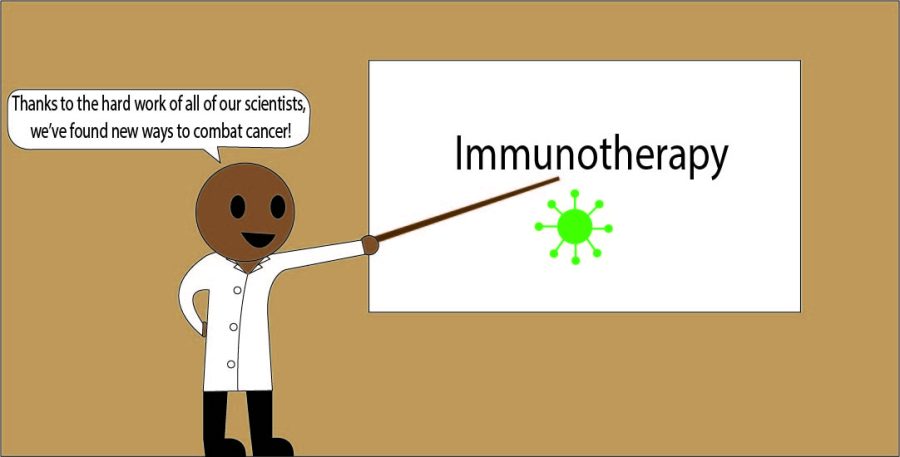 As our world continues to evolve, so do our treatments for cancer. With every year, deaths from cancer fall greatly as humanity begins to finally get the upper hand against the affliction. More specifically, scientists have finally found how to use CAR T-cells to exterminate cancer and use a new type of chemical to make chemotherapy less harmful to children. MRNA vaccines for different cancer types are also progressing quickly, offering hope from those currently suffering. Senior Vasiliy Kovalenko stated that while cancer will probably never be cured, treatments will continue to get more effective until the death rate becomes near non-existent.

CAR T-cell therapy, the most impactful recent advancement in the field at the moment, is a form of immuno-therapy which is gaining frequent use to treat the blood cancer lymphoma. The treatments function by extracting T-Cells from the immune system and genetically engineering them to target the specific type of cancer that the patient is suffering from. The T-Cells can then be produced in large quantities in a lab to completely treat the patient. It is applied after the standard use of chemotherapy, instructing the immune system on how to defeat cancer from the inside. Cancer News , the official source for all news on the subject, claims that “results from three large clinical trials now suggest that, after initial chemotherapy, CAR T-cell therapies may be more effective than standard treatment. These results could herald a change in clinical practice, several researchers said, with CAR T-cell therapies being used earlier in the course of disease.” The usage of CAR T-cells promises to revolutionize the treatment of lymphoma forever, granting more patients a second chance at life where they would normally succumb to the disease. Cancer News further mentions two studies which have shown very favorable results: “In two of three trials—called ZUMA-7 and TRANSFORM—patients who received CAR T-cell therapy after just one round of chemotherapy lived longer without their disease progressing than patients who underwent the standard treatment approach. That approach usually involves additional, or “salvage,” chemotherapy, followed by a stem cell transplant.” Though the treatment is difficult, it has still proven much more effective than what was used prior, having a much higher success rate than just regular salvage chemotherapy.

Another new treatment addresses cancer in children, more specifically acute leukemia. The disease is usually treated with standard chemotherapy, but the drugs have a severe effect on children causing many other medical issues, sometimes doing more harm than good. Freshman Sara Cizek noted that chemotherapy “can be as deadly as the cancer.” This may change, however, as the National Cancer Institute has found that “the combination of all-trans retinoic acid, which is a metabolite of vitamin A, and arsenic trioxide is highly effective in children with standard- and high-risk acute promyelocytic leukemia, or APL. Nearly all patients in the trial survived for two years without experiencing a relapse.” This medicine is a major breakthrough in the field, as treating cancer in children is significantly more difficult due to lower tolerances and a weaker immune system. Malcolm A. Smith, M.D., Ph.D. states, “Twenty years ago, these patients would have been treated with intensive chemotherapy, including drugs that lead to heart problems later in life. By comparison, all-trans retinoic acid and arsenic trioxide have fewer acute or long-term side effects.” Though this treatment does not apply to all typed of cancer, it will still make a significant dent in cancer deaths as leukemia makes up five to ten percent of all cancer, according to Cancer News. More research has also revealed that a similar drug cocktail works for adults, although less efficiently. APL is significantly lower risk overall due to these discoveries.

Another more general solution for cancer is held within mRNA vaccines, a very new advancement that helped hinder the COVID-19 crisis. A little-known fact about the technology is that its original purpose was to treat cancer, but it was eventually adapted for the purpose of destroying COVID-19 when the need arose. It focuses around strengthening the immune system and allowing it to fight off the cancer on its own without need for harmful drugs. The large amount of funding due to COVID-19 allowed the treatment to advance much faster, showing promise where other cures failed. Patrick Ott, M.D., Ph.D., who directs the Center for Personal Cancer Vaccines at the Dana-Farber Cancer Institute stated in an interview with Cancer News, “There’s a lot of enthusiasm around mRNA right now. The funding and resources that are flowing into mRNA vaccine research will help the cancer vaccine field.” Junior Lindsay Wax stated that there is likely merit within the effort to cure cancer. The vaccines work by making the cells that have received the mRNA to produce the proteins that would stimulate a more effective immune reaction, essentially arming the immune system with more ammunition against the harmful disease the vaccine is tuned against. Producing such vaccines, a fast process, as proven by the speed with which covid vaccines became easily available across the world. Sophomore Kaleb Delgano said that though it would never be truly fixed, cancer can definitely be slowed down and made more treatable. For more specific diseases like cancer, these mRNA vaccines will be personalized, taking 1-2 months to develop for each person depending on their type of cancer and the severity. Julie Bauman, M.D., deputy director of the University of Arizona Cancer Center stated that “Personalized cancer vaccines may teach the immune system how cancer cells are different from the rest of the body.”

Cancer is one of the deadliest diseases in the entire world, but with advancements like these happening more and more often, cancer may one day be as distant and irrelevant as the Black Plague.