“Don’t Look Up:” A New Netflix Hit You Must Watch 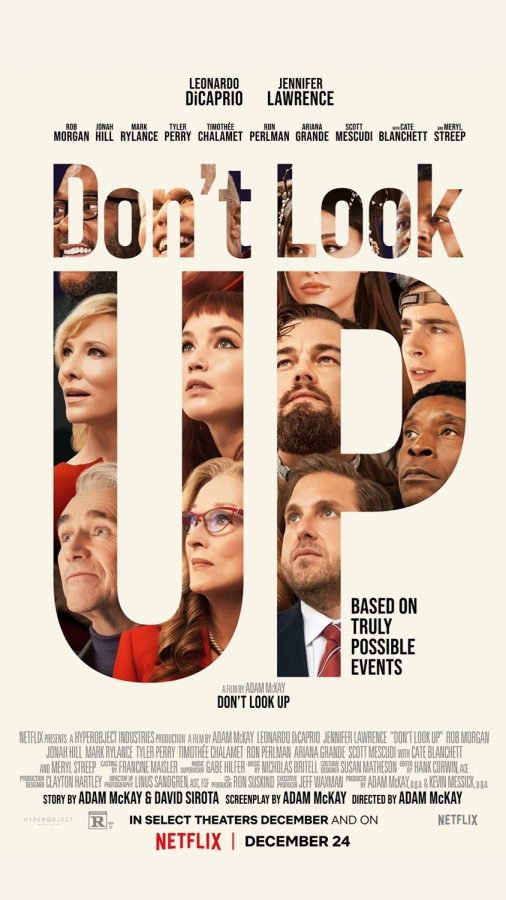 Netflix released yet another hit movie, “Don’t Look Up,” on Dec. 5. The film stars Leonardo Dicaprio, Jennifer Lawrence, Jonah Hill, Meryl Streep, and Timothee Chalamet. In the movie, two astronomers discover a comet, but become alarmed when they realize it is headed straight towards the Earth. With this knowledge, they realize that the end of the world is approaching in only a few months. They struggle to get the urgent message across to the public and the government. The news of the comet is downplayed severely, and covered by pop-culture drama and insignificant events. The two astronomers, played by Dicaprio and Lawrence, work to get their message across by visiting the White House and appearing on news channels. They instead, are made out to be public jokes, known worldwide. As the problem reaches significance, two sides emerge, somewhat mocking our nation and parties now and the measures we will take to support our conflicting beliefs.

This satirical comedy reveals dark truths of our society and media and makes viewers question what they would do in such a life-threatening situation. Although the movie included comedic elements, it reflects our world today in an almost frightening way. We are constantly so focused on drama and issues that have no real effect on our lives, while disregarding the ones that could actually make an impact. The actors in this movie perfectly play their roles as either advocates or opposers of the issue, mocking the extreme split between political parties in our nation today. Jonah Hill and Timothee Chalamet in particular add some comedic relief to the issues presented in the movie, with authentic and sometimes improvised dialogue. I loved how the movie was centered around very present-day material that I could imagine happening in the real world. I personally enjoyed the ups and downs of the movie, along with the unique and unpredictable plot. I highly recommend “Don’t Look Up” to anyone who enjoys comedies, satire, and movies centered around disaster.