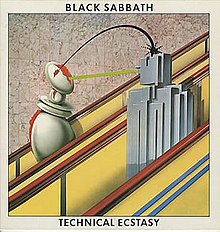 Black Sabbath’s “Technical Ecstasy” was remastered and released Oct. 1, and in my opinion, is shockingly good. Although it is pretty similar to the 2013 remaster, the subtle changes make all the difference in the world. For a relatively old metal album created just when punk rock hit the world by storm, “Technical Ecstasy” holds up well.

The original album was created at the end of the group’s success when the band was often referred to as old, pompous, and cheap. Their legacy was not molded in gold like other bands of their time, as they had made much less of an impact than “the classics.” The band’s widely known drug abuse did not help either, as most people significantly looked down on them for using cocaine. “Technical Ecstasy” was also released as the favor of most metal fans turned to punk rock, and everything that did not conform was often considered dated and not worth listening to. As a result, the album was not considered a major success.

Despite the popular opinion at the album’s debut, it is a classic, and the remaster is as good as it possibly could have been. The synthesizers used in the original album still remain, giving it a unique sound profile soaked in an 80s vibe. Although not Black Sabbath’s signature style, some of the songs’ chord progressions can be described as joyful, giving off the feeling of a warm summer afternoon. If you were to make a playlist of your favorite metal songs, nothing on this playlist would really fit well there; all of its songs unique and don’t resemble anything else in its genre. Listening to some of the songs individually without knowing what they were, it is highly likely that you would guess that they some sort of country.

One of my favorites from the album was “All Moving Parts.” I enjoyed the combination of the quick guitar riffs and the synth, a combo you will not find anywhere else. The lyrics are not for everyone, but I personally like them. The same goes for “Back Street Kids,” in which I also enjoyed the guitar. Although not original, the drum beat also helps the song to stand out.

The album is free on Spotify, and if you ever want to listen to something different, give it a go. It might even get you into a new genre of music.