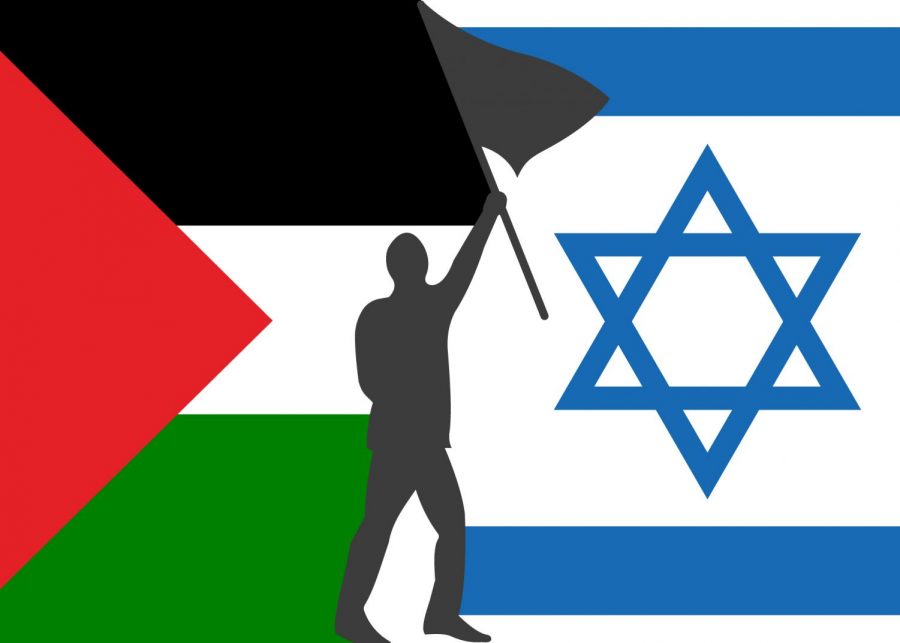 As both tensions and media coverage rapidly rise in a long-contested area, social justice groups and official government bodies alike have mobilized. New perspectives have been sensationalized, and nationalist sentiments have climbed along with aggression between the two nations. In light of recent events in the Middle East as well as connotations aligned with Israel’s current ownership of Jerusalem–a religious haven and the founding location of many world religions–it is crucial to identify and understand the history of the longstanding battle for the Holy Land.

There is one main area of contest- the Gaza strip. Bordering both Israel and Egypt, Gaza is a self-governing region that has long been held by displaced Palestinians in partnership with land on the West Bank. In the years up to and including 2020, Gaza has faced many humanitarian crises such as droughts, inhumane living conditions, and the growing threats of coronavirus without access to vaccines. The unemployment rate has risen to over 43%  and aid from foreign governments dried up after the U.S. and Israel led a movement to blockade Gaza politically and through trade. The issue at hand between Israel and Gaza is said to not be about Palestinians so much as it is about the declared governing group, the terrorist organization of Hamas. The BBC clarifies, “Gaza is ruled by the Palestinian militant group Hamas, which has fought Israel many times. Palestinians in Gaza and the West Bank say they’re suffering because of Israeli actions and restrictions. Israel say it is only acting to protect itself from Palestinian violence.”

One primary issue plaguing those researching this conflict has been the interconnected, complex, and ancient web of cultural, religious, and national histories that snake across current day Israel.  This most recent wave of conflict has stemmed from property rights around both the Gaza strip and more specifically the Palestinian neighborhood of Sheikh Jarrah, located in East Jerusalem. The current ramifications ultimately stem from the historical occupation and ownership of lands in the Middle East. According to NPR, “What’s happening in the community of Sheikh Jarrah now really began decades ago before 1948, the year the state of Israel was founded. The idea was to go and found a nation-state, which would be a Jewish state, a Jewish majority state… What happened in 1948 involves something that was necessary for the creation of a Jewish state in Palestine, which was to decrease the Arab majority and increase the Jewish minority… A United Nations resolution that called for the partition of Palestine into Jewish and Arab states – this was just a couple of years after World War II and the Holocaust.” Although this only begins to scratch the surface of the tense histories between Palestine and Israel, many have only recently come to know of the conflict, and thus missed out on very important contextualizing factors. Senior Meghana Annemaneni states that she only heard about the conflict in May of this year, likely due to the sensationalized nature of the current conflicts across social media.

Along with the confusing web of history recently brought to the attention of the public, current death tolls, human rights violations, and wartime affairs have reached the media in full swing. And with the onslaught of information and the nature of the wartime conflict, discrimination has come hand-in-hand with mass media coverage. Senior Richard Martin states, “I have definitely seen harmful anti-Palestinian rhetoric online. Oftentimes, the racism is present in dog whistles, like saying Palestinians died, as opposed to Israelis being killed. People definitely show a lot of indifference to the suffering of Palestinians and I think that’s revealing of their more racist feelings towards Palestinians. As for anti semitism, I have seen people bringing attention to it and calling it out, but I’ve only seen a few first hand examples of it besides a few small news stories. Sadly I’ve seen people using antisemitism to deflect from the issue at hand.” As with many conflicts of all natures, racially or ethnically targeted altercation is quickly followed by racist rhetoric and sentiment on both sides. Whether a perpetrator of conflict or victim, both the Palestinians and Israelis have been engaging in harmful discrimination, although comparisons to be drawn between the two are rather unclear.

One cannot hope to address the violations of ethics and morality regarding racism and ethnic discrimination in Gaza without discussing the growing role of the United Nations. Most recently the UN has spoken out urging both parties to a cease fire, but just a few weeks ago a plurality of votes led to a near-decision to condemn Israeli forces and instigate a cease-fire, a motion blocked by the United States three times. There was ultimately a motion passed to call for a cease fire regardless,- even as the United States brokered a 700 million dollar weapons deal to Israel, as well as start a formal investigation into potential war crimes committed by the Israeli government and sponsored by Prime Minister Netanyahu. Senior Richard Martin states, his opinions on the topic expressing that “The USA has a lot of responsibility for the suffering of Palestinians. We give Israel nearly $4 billion a year in military aid…. If the US wants to stand for human rights and democracy, it has to stop aiding nations that violate human rights and do not support democracy, like Saudi Arabia and Israel. The (current United Nations)  investigation into Israeli war crimes is completely warranted and a long time coming. In 2014, roughly 80% of Palestinians killed were civilians… Israel strikes civilian hubs, claiming Hamas was there. Even if Hamas was in the areas they strike, that does not excuse their actions. Additionally, Israel gives an hour’s warning that they will strike a building, which completely undermines their argument that they are targeting Hamas, as Hamas would just leave when they got the warning. Israel targeted charities, hospitals, residential buildings, and press buildings. That is illegal, that’s not even up for question.” With the current state of international relations in mind, Psychology teacher Rachel Heilman sums up her reasoning as it relates to moral obligation. “It is my philosophical position that): civilians should not be involved in wars and should not pay such a heavy price for the actions of their governments, which may or may not represent their views.  When one party (whether person or government) has significantly more power than the other, they have a special obligation to consider the impact of their actions.  Intent is not the only thing that counts, particularly when the impact of your actions is so significant.  Popular sovereignty should be the guiding force behind government decisions.  To live in peace compromise is necessary and in the Palestinian-Israeli Conflict that is made especially difficult by the asymmetrical power balance in favor of the Israelis and the willingness of Hamas to use civilians as shields.  I’ve always said – you know democracy is working if no one is completely happy.” And it’s no secret that both the United States democracy and the state of affairs in the middle east have left little satisfaction with the past, present, or prospects.

Due to the recent influx of information and dangerous rhetoric that is wreaking havoc on relations between Israeli and Palestinian citizens, the history of conflict between two long-warring nations has been minimized and oftentimes ignored in favor of rapid information access. To fully understand the plight of the Middle East in this sense, one must study history, listen to accounts from those with stake in the issue, and extensively search their own moral guides that govern a personal code of ethics. Whether or not the issue in Gaza will continue to escalate or be subdued by political or physical force is up for debate, but only time will tell.