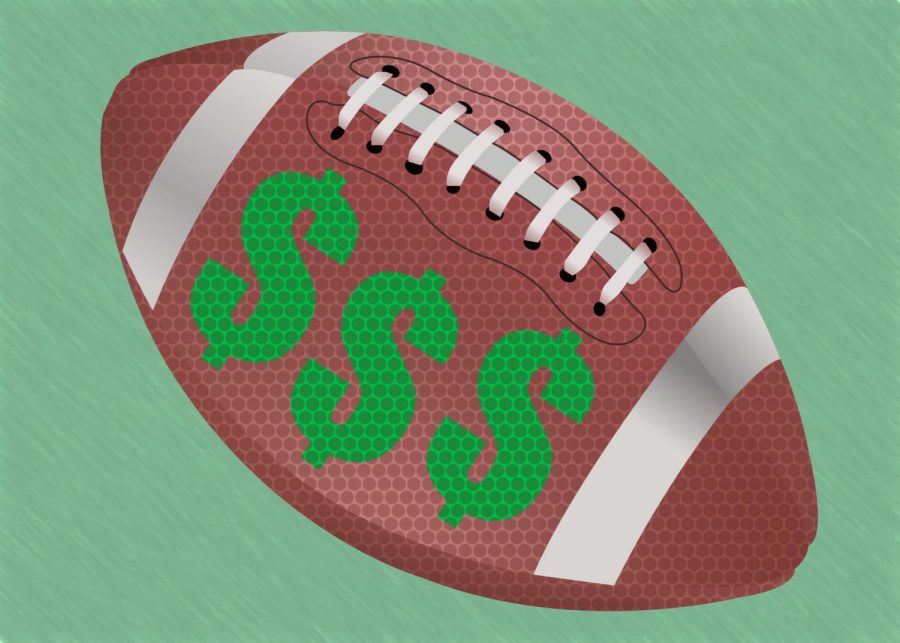 In recent years, as high school sports have evolved, the cost of participating in them  have grown to an extremely inflated degree. In an article by the University of Ohio, recognized in 2015, over 7.8 million students participated in high school sports that year. This was over a 12,000 student increase from the previous year . When it is compared to the present day population of high school athletics, that statistic has grown to over 8 million students. In just a five-year span, over 200,000 more individuals have grown an interest in high school sports, but with this excessive growth comes the question of how much sports should cost per student.

High school sports have seen an increase in participation for 31 straight years, and with so many students participating in said sports, high schools need to provide adequate and top-of-the-line equipment to be used for the everyday training a high school athlete endures. As of now, the average parent spends about $700 to cover the cost of uniforms and hefty fees for just one season of one athletic sport per child. Another issue is the fact that some schools may be performing better than others, meaning they will be required to spend more due to traveling, bussing, and more.

It seems fairly understandable, the price of high school sports, until you realize that only 30 percent of student-athletes have families with an annual income of less than $60,000 per year. This now makes the cost of sports highly expensive, and somewhat unaffordable for the lower class.

Senior Megan Stringer suggests, “I would probably make it a percentage based merit. For example, if you are making over $200,000 per year, you would spend the highest payment for the sports fee. Whereas if you make anywhere between $50 to $100,000, or $100,000 and $200,000, the cost will vary based on your income, which will equalize the price overall.”  The idea she suggests leans towards the ideas of taxing the rich more than the poor. However, each class will be spending the same amount per income, which will benefit the lower class for the excessive costs of these high school sports. Overall, this seems like a fair idea, and will reduce the cost for low class individuals, but it possibly could be unfair towards the wealthy side of people.

To stray away from the negative when it comes to costs, the best way to notice these findings would be through discovering the positives of being involved in high school athletics and what it means for future development. The continued study by Ohio University states that participation in competitive interscholastic athletics leads to occupational advantageous traits that persist across a person’s life. What this means is higher salaries, more likelihood of having a post secondary education, and more employment chances as well.

With the cost of high school athletics subtly rising over time, the benefits that come along with it seem to equal out the positives and negatives of inflation. It is also stated that nearly 55 percent of parents believe that sports participation provides skills for their children to help in future careers, alongside future schooling as well as higher levels of leadership opportunities, self-confidence, and self-respect have all also been believed to be increased after being involved with high school athletics, which then begins to beg the question, is the cost of high school sports too much? Or does it provide students with enough to benefit them in the current and future stages of their lives?

Freshman Madison Kehl believes that “they need to make it expensive enough to provide costs to stay fundable for all the people doing these sports.” If sports are so beneficial and important in a child’s adolescence, then why make it so expensive? With the costs of not only high school sports going up, but the inflation of basic societal needs increasing as well, high schools have to recognize that in order to stay above the curve, adjust pricing to maximize profit and improve future student experience.

Looking at it from a female standpoint, it is also recognized that females reap greater crew benefit from participating in sports. Two thirds of all females participating in sports have occupied or are now occupying a high-level executive position. Nearly 76 percent of women agreed to have adopted behaviours and techniques from sports in the corporate environment and have improved team performance in the workplace. Lastly, nearly 73 percent of women agree that people who have engaged in sports at some level, primarily in high school, participate more effectively at work.

With male and female participation in sports providing positive development in cooperation of skills and effectiveness, alongside improved function in the workplace and better assertiveness. Nonetheless, it is practically a given that high school sports should be recognized as valuable and important to not only the high school itself, but to society as well.

To finalize the topic, high school sports costs have inflated vastly in recent years, and have prevented families from providing athletic opportunities for their children. It has been proven that athletics provide positive ideals to the average high school student and prepare them for future scenarios, not only in the workplace, but in their home life as well. However, the pricing of high school sports is too expensive to the average or below average income and should be recognized by high school boards with the intention to decrease costs in order to increase student involvement in order to improve the high school student experience.