How Advertising and Studies have Shaped Breakfast 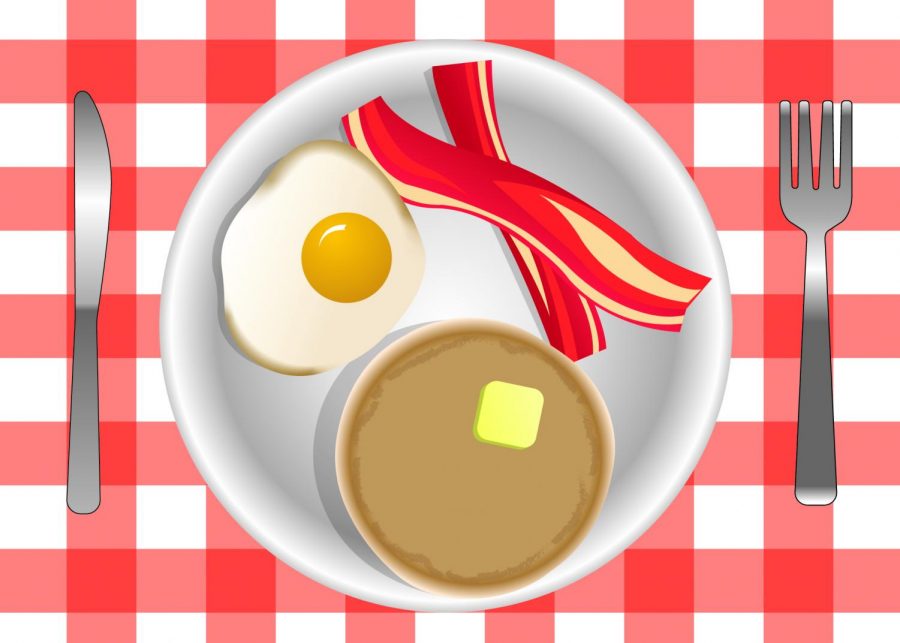 It has been drilled into the heads of many American children since they could remember: “Breakfast is the most important meal of the day.” Forget lunch, dinner, or any snacking in between; eating after waking up to ‘break the fast’ is the most crucial meal to a healthy life according to parents, researchers, and cereal companies. However, companies may be pushing this idea in order to make a quick buck off the highly profitable ready-to-eat breakfast foods including cereal. After all, according to Alex Mayyasi of The Atlantic, General Foods created the phrase, “Breakfast is the most important meal of the day,” in 1944 to sell Grape Nuts, one of their cereal products. Research showing the supposed benefits of breakfast may not be as trustworthy as some think, either, causing some to question whether breakfast is really necessary.

Nowadays, breakfast foods are essentially their own category. Some people find themselves eating cereal, muffins, pancakes, eggs, and bacon in the morning. Others may opt for leftovers from last night or eat nothing at all. It is unclear why some foods are more ‘acceptable’ to eat at one time than another; perhaps it has to do with cravings after hours without eating, or perhaps it is the work of companies advertising breakfast products. Either way, many agree that the time of day should not influence what one eats, including sophomore Mira Johnson. Johnson says, “Don’t eat something sugary in the morning if it makes you nauseous, and don’t be afraid to have a bowl of cereal for dinner.”

In the first half of the 20th century, cereal became incredibly popular for multiple reasons. Cereal is convenient and does not require much preparation, which was especially appealing to people as work hours and reliance on consumer goods increased. Additionally, since many cereals are filled with vitamins, it was believed that cereal was healthful and could solve nutritional deficiencies. Thus, the cereal craze began, and it has arguably not stopped since. Thousands of cereal boxes continue to line the shelves of grocery stores with hundreds of different flavors and types with name-brand cereals and generic cereals.

Madame Legier, a French teacher at IHS, has noticed that “breakfast cereals often use campaigns to appeal to children.” Cereal companies use bright colors and cartoon characters to advertise sugary cereals such as Froot Loops or Trix to children. There are worries about encouraging children to eat large amounts of sugar in the morning, though, as consuming excessive amounts of added sugar can lead to obesity, diabetes, and other health issues. Some cereals are fortified with nutrients, meaning nutrients that do not naturally occur in the ingredients used are put into the food to improve nutrition. Vitamin D, calcium, and other important nutrients can be found listed on the nutrition facts label. However, fortified foods are often highly processed and can contain large amounts of sugar, which counteracts any health benefits from increased nutrients.

Companies are not afraid to tout the benefits of breakfast on boxes, bags, and in commercials. Cheerios, for example, claims to lower cholesterol because of their fiber content. Students of all ages are encouraged to eat breakfast before school to improve their concentration and memory. These claims are backed by some research. According to Jessica Brown’s article, a study found that “fiber and micronutrient intake, including folate, vitamin C, iron, and calcium, was better in those who had breakfast regularly.” Other studies, according to Jamie Ducharme, have shown that those who eat breakfast typically weigh less than those who skip breakfast.

Research on the benefits of breakfast does not come without criticism, though. Studies such as one described by Aaron E. Carroll, a study that found skipping breakfast may increase the risk of heart disease, can be considered misleading or incomplete. Carroll says, “They improperly used casual language to describe their results” and “misleadingly cited others’ results” in numerous studies about how breakfast impacts health. One argument against this research is that those who have the ability to eat breakfast are more likely to be of a higher socioeconomic status than those who cannot eat breakfast and are therefore able to be healthier all-around.

Breakfast foods such as cereal and granola bars also can have high amounts of sugar that nearly reach the amount a typical person should be eating per day to the point that they may be compared to dessert. A Which? Investigation found that many popular cereals, oatmeals, and porridges contain large amounts of added sugar, and have misleading portion sizes to make the amount of sugar appear lower. Senior Benny Po says that a healthy breakfast should consist of “fruits and nutritional items rather than just sugar.”

The choice of whether to eat breakfast or not is ultimately an individual choice. Some may feel hungry in the morning and need to eat to get some energy, while others may feel nauseous if they eat too early in the morning. Junior Hahna Lloyd says, “I don’t think breakfast is necessary, I think you should eat whenever you feel you are hungry. If you force it, then I don’t think that is a good habit to have.” If one chooses to eat breakfast, it is important to eat healthy foods with protein, vitamins and little or no added sugar.