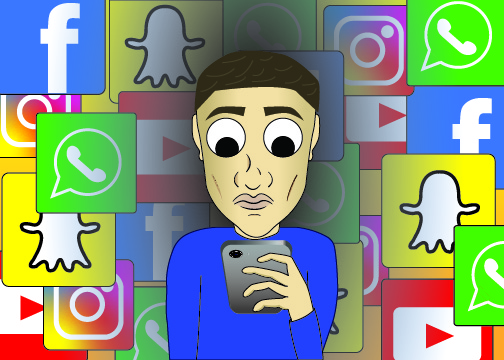 Social media has quickly been integrated into our everyday lifestyle. Without even knowing it, people around the world have been impacted forever. It is easy to disregard the ways social media affects us and our peers, but it is important and interesting to see the hidden consequences.

Social media seems to have its biggest influence on teenagers. Growing up in this age of technology, how would youth today know any different way of life? From birth, technology is introduced as a necessary element and resource. Some spend as little as two hours on social media, while some are engaged for up to 10 hours, almost the entire period of time that we spend awake. Before these new applications, humans learned how to engage in conversation, read emotions and body language, and connect with other humans on a personal level. The invention of social media has provided many with a screen to hide behind, allowing for an assumed invincibility. But how invincible are we truly?

It is easy to say something behind a screen without looking at its true effects. Sophomore Emma Erhardt reports that “people can be bullied, harassed, and threatened” through the use of social media. We gain a certain confidence when we view ourselves as untouchable, explaining the brutal but easy ways we can target others and be targeted. Not only can we face intimidation from others, but we can, in turn, make ourselves the victim of our own “bullying.” When you scroll down your Instagram feed, how often do you see perfect images of people? Profiles present an organized and highly desired life, often leaving us with a pondering question: why am I not like that? Comparing yourself to others on social media platforms is dangerous, but not surprisingly common. History teacher Jordan Frost shared that his self-esteem is not as greatly impacted now as when he was a teenager with social media, but he sees the constant comparison and body image issues displayed throughout the platforms. He also reported seeing these signs in his students.

Social media does not always only exude negativity. It can provide platforms for those to be involved in groups based on similar interests, and to boost self-esteem. Today, everyone has the opportunity to present the best version of themselves publicly. Youth who search for validation can find it when they create a perfect representation of their lives for others to see. Even when lacking true confidence, social media can attribute to us striving to be something we might be very far from in real life. Junior Sasank Gopisetti reported that his mood is “happy after visiting social media,” and that his self-esteem is impacted positively, attributing to healthy confidence. Receiving constant responses and feedback from others encourages us, and keeps us hooked to our screens.

Wanting to constantly revisit social media actually has a direct correlation with our brain activity. Dopamine is a hormone that when released, attributes to our reward system, making us experience feelings including pleasure and satisfaction. Our dopamine receptors are triggered through the use of social media, through simple aspects such as likes and comments. Sometimes, this can develop a dependence resembling addiction by relying on social media to be the source of our happiness or validation. Additionally, many students and staff members agree that social media has direct ties with anxiety and depression.

It is important to question how connected we truly are. Social media often gives us an illusion of connection. How equivalent is a quick text to a face-to-face conversation? Hyperconnection can actually lead to loneliness, and an increased chance of being ignored. This has been shown in studies countless times. BBC states, “The American Journal of Preventive Medicine last year surveyed 7,000 19- to 32-year-olds and found that those who spend the most time on social media were twice as likely to report experiencing social isolation, which can include a lack of a sense of social belonging, engagement with others and fulfilling relationships.” Over time, it has become easier and easier to effortlessly contact others. This forms false expectations of what we truly need from human interaction and allows for us to take the easy way out of confrontation. Senior Emily Webber described Snapchat as her favorite social media application, but then proceeded to state that “using Snapchat isn’t actual conversations,” further explaining that social media actually makes her feel less connected to the people in her life. The motive of numerous social media applications is to stay in touch with friends, but there seems to be a great difference between staying in touch and simply responding to an icon on a screen.

Constant social media usage has blinded us from activities that we would have otherwise been engaged in. We lack effort in relationships, focus in work and schoolwork, and the ability to truly live our lives beyond the limit of a screen. Becoming so in tune with the publicly presented actions of others centers all of our energy on something artificial. Erhardt once again adds to social media’s influence by saying without these platforms, “I’d probably be doing crazier things because I can’t get exposed.” Our lives are not meant to be perfect. Through trial and error, we learn how to be our best selves. When every move is watched by someone else, we are encouraging perfectionism and an artificial lifestyle.

It is up to the user to decide the ways they share and scroll, and the boundaries they set for themselves. Begin to note how much time you spend on social media and ask yourself if its purpose is still significant in your life. Social media does not have to be degrading and detrimental if we manage how and when we use it, creating a healthy and enjoyable balance.