The Struggle of the School Parking Lot 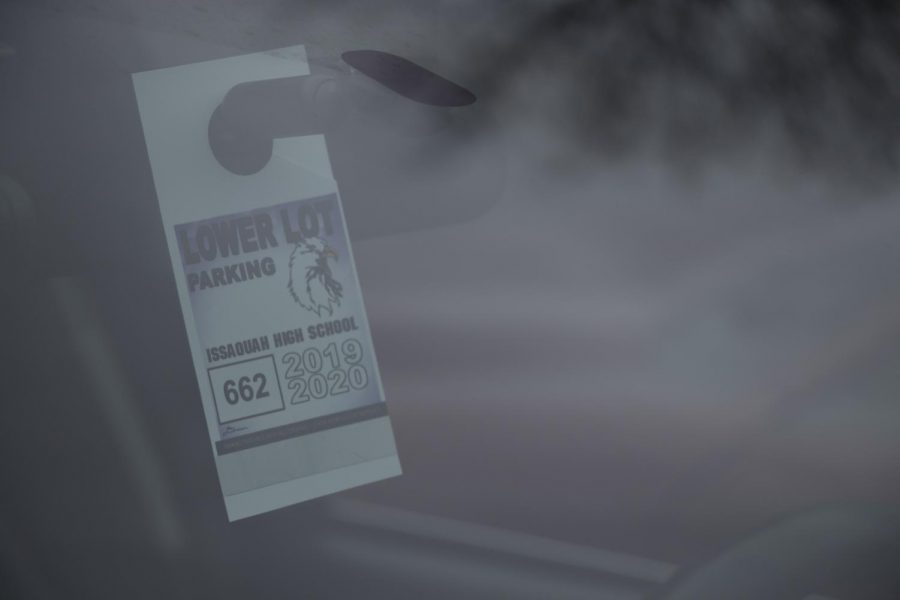 PARKING LOT WOES: Students at Issaquah High School must purchase a school-parking pass for $140 in order to park in the school lot. Despite the pass system, some students choose to take the risk and park illegally.

It is hard to describe the range of emotions associated with the school parking lot. Obviously students are grateful for the student parking lot, which allows them to control when they leave for school every day. It also puts an end to walking in the dark to the bus stop and removes the need for a daily ride packed with sleep deprived high schoolers and middle schoolers. It allows students to carpool with friends, stop by Starbucks on the way, and jam out to their favorite music every morning. But the parking lot can also bring out a lot of extreme feelings in students as well. Senior Kobi Sunday described the parking lot as “aggressive, chaotic, and stressful,” but let us take a closer look into the daily struggle of the parking lot.

There are two main issues with the school parking lot, number one being the traffic, and number two being parking fraud. School parking passes are assigned at the beginning of every year through a lottery system which prioritizes carpools, single seniors and then single juniors. This system can be seen as unfair for underclassmen, but sophomore Lauren Lailey said, “The system is fair because although it makes it harder for underclassmen to get a spot, I’ll want the same when I’m a senior.” Junior Isabel Mullet agreed and said, “The current lottery system is fair and should prioritize upperclassmen.” This year, all carpools got a pass, most single seniors got a pass, and even some single juniors got a pass, which is very lucky for them. Once chosen to get a pass, students must pay a hefty fee of $140 to secure their spot. While some students see the $140 pass fee to be a lot, Sunday said, “I think it’s still a reasonable price considering it’s less than one dollar a day, and it is also good incentive for students to carpool and split the price of the pass.”

If you do not get a school parking pass then you are left to fend for yourself on the streets of Issaquah, where many students end up parking on the side of the road, in neighborhoods, churches or even near the community center. Lailey did not get a school lot pass this year, and so she decided to get a pass for the church lot just past Issaquah Middle School. Lailey said, “I like the church lot because the spots are big, a lot of my sophomore friends park there so we can all walk to school together, and it’s a lot easier to get out of the church lot than it is to get out of the clogged school lot.” Senior Nicole Lee agreed and said, “Leaving the main lot is always a struggle because students want to beat the busses and so people are very aggressive, I got cut off five times one day! And then if you don’t beat the busses then it’s about a 30 minute wait to get home, which is crazy.” While Lailey does not mind the extra seven minute walk to school in the morning in order to get out fast after school, other students want the most direct and easiest option possible. This leads some people to take the risk and park illegally in the school parking lot and hope they do not get a noticed by our security officer, Neil Lascher. Lascher said, “I go out and check the lot whenever I’m not busy not doing something in the school,” so students do not know when Neil will be ticketing or not.

It is a little surprising, and yet common knowledge how often people park in the school parking lot without a pass or with a fake pass and think that it is acceptable. It might be that students do not think about the consequences of their actions, that they will be displacing someone who did pay for a pass, or that they simply do not care. But the truth is, as senior Gaje Gunter put it, “It might not affect a ton of people, but it’s not right because they’re stealing spots that people paid money for.” Junior Josh Geisser said, “I’ve been late to class on multiple occasions because I couldn’t get a spot in the lot even though I’ve paid for a parking pass.” Officer Lascher described the consequences of parking illegally to include “putting the vehicle on a tow contract, assigning a $50 fine, calling the students’ parents and holding school items, such as school dance tickets, your yearbook, sports registration, and your diploma.”

It is hard to regulate over 300 parking spots in the different school lots so what is the root of the problem and what solutions are there? Senior Saxon Cullimore described the root of the problem to be the layout of the parking lot. He said, “With the middle school, high school and busses all feeding out to the same exit and single roadway, the traffic is really impossible to control without a change to the layout.” Other students say the problem is how easy it seems to replicate passes or just park in the lot without getting caught. Senior Morgan Wood said, “We just need more spots for students and more exits. Then people won’t have to park illegally and traffic will be able to filter out without all the congestion.”

So now let us talk about solutions. Is it really possible to get rid of the fraudulent activities in the parking lot or is our current system good enough? Sunday said, “One system that could be implemented could be a scanner system like at a parking garage, so you have to scan your pass to get in and each unique barcode could only be scanned once.” Although a good solution Wood pointed out that “it would be very expensive and not super practical for just a school parking lot.” Cullimore threw out another idea where “students would be given a sticker instead of a paper pass in order to make sure people couldn’t copy passes, or students could be assigned spots in the lot and they would park in the same spot everyday.” Deciding who gets what spot in the lot would most likely be done randomly to ensure fairness, but some students could be upset by their assigned placement, which could lead people to steal spots anyway.

After looking over some ideas for improvement, students concluded that no matter the system, those who want to break the system will break the system. Although the school parking lot is imperfect, and people occasionally break the rules, overall, the system is functional and has minimal issues.