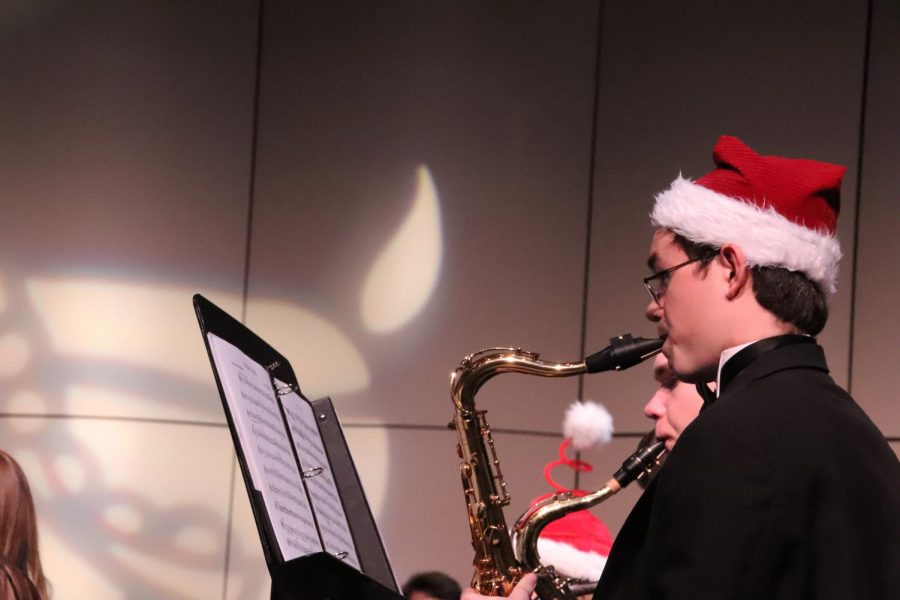 If you have a class in the 1400 hall first period, you’ve no doubt heard the melodies (and screams) of IHS’s Wind Ensemble resonating out of the band room in the early morning, and Wednesday night, the hard work of these students was showcased at the Winter Band Concert.

The last act of the night, Wind Ensemble assembled on stage with crisp blazers, dresses, the poise of seasoned musicians, and four songs under their belts. They kicked-off their performance with an iconic piece called “Satiric Dances” by Dello Joio. With powerful, ear-catching introduction and its fast-paced, diverse measures, Wind Ensemble certainly captured the audience’s attention.

After a brief intermission advertising the band’s next fundraiser, the band director Patrick Holen started up “Conga Del Fuego Nuevo” with a promise that the rhythm was enough to get a conga line going. The arrangement did not disappoint. “Conga Del Fuego Nuevo” delivered a snazzy, upbeat rhythm, certainly befitting a dance floor, and was well accentuated by an essential beat from the Percussion Ensemble.

The final song showcased by Wind Ensemble–and the final song of the night–was “Sleigh Ride” by Anderson. Bringing the winter spirit to this December concert, senior students in the ensemble donned Santa hats and projections of reindeer and snow-covered scenery lit up the walls of the auditorium. Wind Ensemble honored this holiday classic well, especially with sleigh bells accompanying their brilliant playing and highlighting the higher notes of the piece. “Sleigh Ride” ended with the amusing recording of a neighing reindeer accompanying Wind Ensemble’s charming final melody and the echo of well-deserved applause. “Sleigh Ride” seemed to be the highlight of the night as audience member Janell Murphy and clarinet player Carlos Reyes both agreed that it was their favorite piece. Murphy said, “‘Sleigh Ride’ is a classic, and I think it was well done. It couldn’t have been better.”

It is clearly visible that hard work and supreme dedication went into this concert. When speaking about Wind Ensemble’s performance, Reyes said, “I felt like our performance was very good. We executed our songs well, and we stayed in tune for the most part. The most difficult part of the performance was making sure our entrances were in sync and no one was coming in late. Also, that everyone knew their rhythms.”

Throughout this concert, Wind Ensemble demonstrated a variety of pieces with completely different energies and were able to masterfully attune their playing to each piece. Another concert wonderfully done, members of Wind Ensemble and the rest of the band are sure to shine at their next performance in February for IHS’s annual Swingin’ in Vienna.