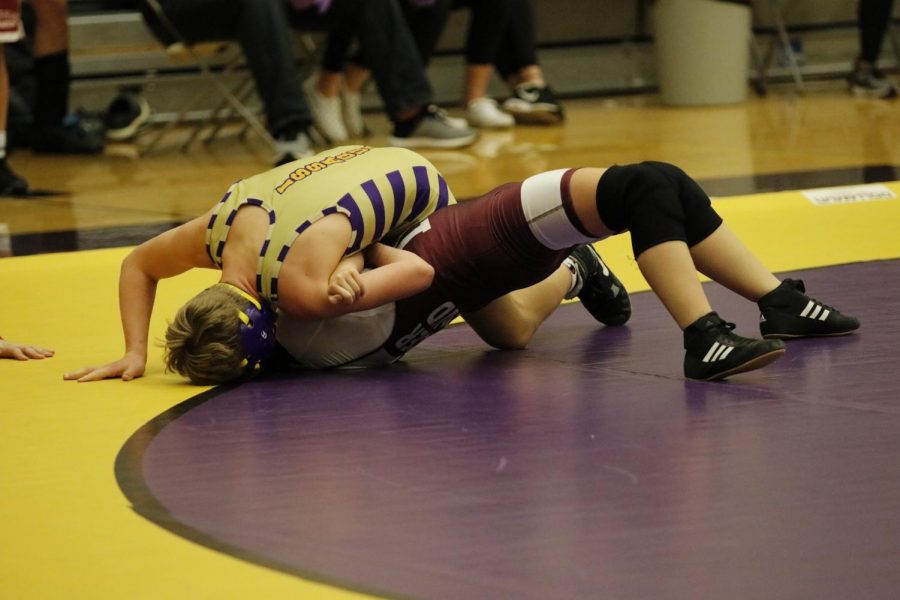 Thursday night, varsity wrestling hosted a double duel, meaning four teams were wrestling at the same time. Issaquah’s match against Mercer Island started spectacularly, with senior team captain Nathan Asistin scoring twelve points. He won twice as many points as any other players during that match (six). Asistin used the tactic of repeatedly letting his competition escape before putting them into another hold, earning him extra points.

Senior Carson Tanner, one of the team captains, followed Asistin and pinned the Mercer Island wrestler with ease. He said, “My personal goals this season are to win as many tournaments and matches as possible. Post-season, I hope to place in state above sixth place. That’s what I got in sophomore year. Last year, I was injured. As a team, I hope we go to Kingco and become state champs.” He said he prepares for each match by “doing stance and motion, shadow wrestling, stretching, jogging, bouncing. Mentally, I just have to get myself into the mindset, you know, and talk to my friends. I typically have a plan going into it, but I always have to adapt to what the other person does.”

Throughout the match, the varsity players crushed their opponents with expert moves such as half-nelsons, cradles, and takedowns. Victor Marcenac, known as the “cradle master,” finished his opponent with a cradle, a constricting move that pushes the player’s head towards his knees like a baby being cradled. This pinned the opponent, winning Marcenac the match.

Freshman Quinn Seiffert competed in his first varsity match ever and won. He repeatedly took down the opponent, and finished him with a move called a butcher. Sophomore Jake Wikes, a junior varsity wrestler, said, “The match went very well. The team fought hard.” When asked about his strategy in a match, he said, “I’m not the best at offense, so I let them attack first. Then I read their actions and play off of that. It’s kind of like a make your own adventure book.”

Head coach Kirk Hyatt wrestled for Issaquah High School, and in 1974, he won the title of Kingco champ. He said he has been coaching for 25 years, and for this year he said, “I want the team to stay top two in the league, win Kingco for the eighth time in a row, send as many kids to regions as possible, and place in state.” About the match, he said, “The team wrestled well. There’s been high conditioning and the kids are progressing at a rate I appreciate. We still have a lot to work on, but I would say the season is starting off well.” He added, “I’m going to be sad to see Carson Tanner graduate. He’s the last of the family–I’ve had all his brothers. For 15 years I’ve had a Tanner on my team.”

The final score was 72-12, earning Issaquah another win. Wikes described wrestling as having a “good work ethic,” Tanner with “hard, fun, and bittersweet,” and Coach Hyatt with “motivated, desire, and dedication.” All these traits are visible in the team’s hundreds of wins and their focus and perseverance in their individual matches. Their next match is against Interlake and Newport at Newport High School. Show them your support by coming out and cheering them on!