Troubling Research for Concussions in Sports 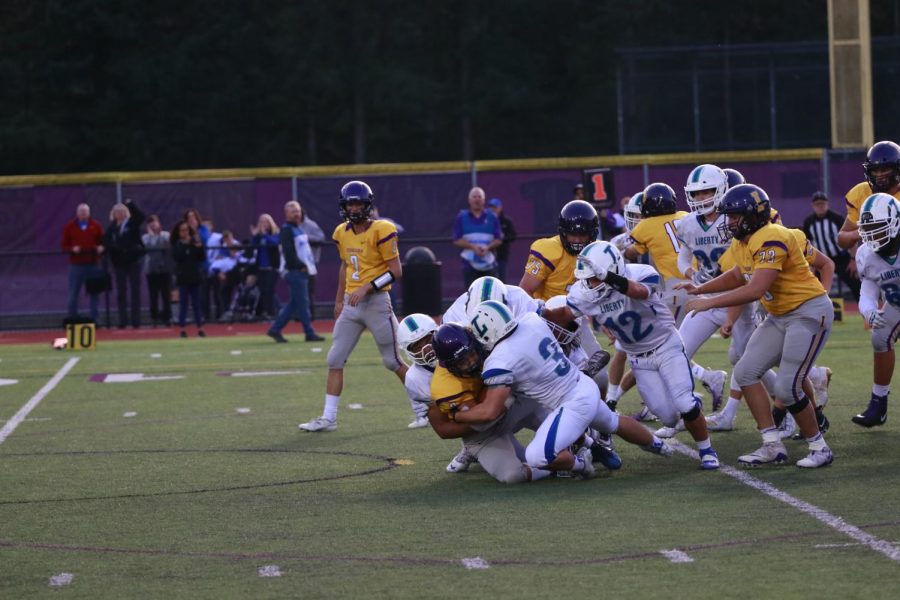 CAREFUL OF CONCUSSIONS! Issaquah’s running back is tackled to the ground by three Liberty defenders in a low-scoring 9-3 loss for Issaquah. Research shows that the repeated blows to one’s head may lead to them developing harmful brain diseases later in their life.

Despite the benefits of sports, there are risks involved? According to Brainline, “It is estimated that as many as 3.8 million concussions occur in the U.S. per year; however, as many as 50 percent of those concussions may go unreported.” Concussions have recently become a widely discussed topic in the media due to increased research into their long-term implications. The public scrutiny that certain sports have received for their high-risk of concussions has prompted numerous safety measures. Nonetheless, concussions are a serious issue facing both youth and professional sports that could potentially intensify as more troubling research regarding concussions reaches the public.

A concussion is a traumatic brain injury caused by a jolt to the head or by a hit to the body that causes the brain and head to move rapidly back and forth. Due to its loose definition, it can sometimes be difficult to identify when exactly an athlete has sustained one. In fact, Brainline has reported that “69% of athletes with a possible concussion played with concussion symptoms.” Freshman Grace Courtney said that the ‘warrior mentality’ in sports, specifically football, may contribute to this striking percentage because “players do not want to be viewed as weak by missing game time or fear that their coach may be angry with them if they do.” While educating players and parents about the consequences of playing through a concussion could be an effective course of action to lower this percentage, players should be self-advocates for their own health. Regarding players’ role in reporting brain-related injury symptoms, junior Alex Benis said that it is inherently “difficult for a coach to recognize signs of trauma in the flow of the game and that the players need to be the ones that report their concussion symptoms. But if a coach sees something that worries him, he should not be a passive bystander and rather should have that player thoroughly examined for a possible concussion.” Players have to be aware of their brain’s condition because if they turn a ‘blind eye,’ they could be seriously damaging themselves in ways they cannot even imagine.

Numerous sports at all skill levels have implemented preventative measures to reduce concussions. Most notably, the NFL made substantial changes to the rules in an attempt to make their product safer for their entertainers. Senior Jeremy Stretz said that these changes included “discouraging players from tackling with the crown of their helmets, moving touchbacks up to the 25-yard line to disincentive kick returns, removing helmet models that did not pass NFL testing, and disallowing ‘blindside’ blocks.”

Chronic Traumatic Encephalopathy (CTE) is a degenerative brain disease found primarily in athletes. It is classified as a very rare disease with less than 20,000 cases per year in the U.S. The disease is caused by repeated head injuries and symptoms include behavioral issues, mood problems, and impairment to critical thinking. CTE does not occur until many years after head trauma injuries. Its uncertain nature and potential to erode one’s future quality of life has parents signing their kids up for non-contact sports. Dr. Bennett Omalu, who is credited for discovering the link between CTE and football, studied the brain of deceased NFL center Mike Webster and that of former NFL player Terry Long. In both brains, he observed signs of trauma consistent with that of CTE. According to Deadspin, the findings paved the way for 18,000 retired NFL players agreeing to a 765-million-dollar class action lawsuit over concussion-related brain injuries. Benis disagrees with the conclusion of this lawsuit, pointing out that football players like himself know that the game is averse to their health and in spite of this, they voluntarily sign up. He said, “No one forces you to play football. It is a decision that one makes on their own and obviously tackling other men is not a physically healthy activity, so I do not see why they are being financially compensated for brain injuries they sustained.” While Benis establishes a credible counterargument, the NFL’s settlement may have had more illicit undertones. The NFL has long claimed to be oblivious to the health consequences of repeated concussions and the settlement ensured that they would not have to share any internal files that outlined what it knew or when it knew about concussion-related health problems. Simply put, the settlement allowed the NFL to hide the contents of their ‘Pandora’s box’ to the public.

The result of these modifications was ESPN reporting that “concussions were down a remarkable 23.8% in the 2018 season compared to the previous season. Including the preseason and practices, concussions fell from 281 to 214.” Although these numbers are encouraging, it is evident that even the most innovative-sounding equipment cannot completely stop concussions in sports. Current NFL player Luke Keuchly of the Carolina Panthers perfectly summed up the physical nature of football.  According to SI, he said, “As long as there is full speed contact, there will almost certainly be concussions.” In addition to professional sports, youth sports are also aiming to combat rises in concussions.” For instance, youth ice hockey has banned body checking and many youth leagues have developed comprehensive concussions protocols.  Despite attempts to take concussions out of youth sports, high contact sports such as football and ice hockey have observed a rapid decline in participation rates. Sophomore Anna Boone said that the big reason behind the slide is that “parents are rethinking their children’s participation because of former NFL players being diagnosed with CTE.”

Research has shown that woodpeckers similar to humans can develop CTE from the repeated banging of their heads. Evolution has given woodpeckers numerous unique protective advantages.  According to Live Science, these include a specialized skull bone structure, a shock-absorbing beak, and a protein that seemingly mitigates the effects of CTE. Moving forward, it will be interesting to see if scientists can better understand how woodpeckers cope with CTE and if any of their coping mechanisms could be realistically applied to athletes in some capacity.